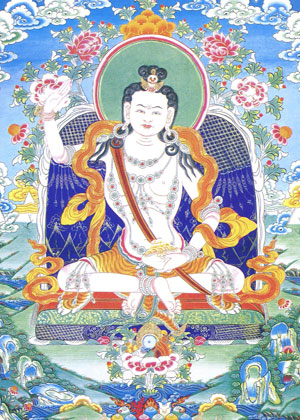 Jnanasutra was born to a low caste family in Kamashila, eastern India. Jnanasutra became a scholar and traveled to Bodhgaya where he met Vimalamitra. Vajrasattva appeared to them both and instructed them to travel to the Bodhi Tree Temple in China to meet Shri Singha. Jnanasutra obeyed Vajrasattva's advice only after his friend Vimalamitra returned from China with glorious news of his meeting with their master.

When Jnanasutra arrived at the temple, a dakini instructed him to go to the Siljin charnel ground. He served his master for three years and then beseeched him for teachings. He stayed with the master receiving teachings and empowerments for many years. During this time Shri Singha often behaved in mysterious ways, wandering in charnel grounds, transforming into various forms, mingling with the dakinis and facing frightening beings without the slightest fear. Eventually Shri Singha told Jnanasutra that the texts of the teachings would appear when the time was right.

Seven days after his master left him to visit the King of the country of Li, Jnanamitra saw Shri Singha appear in the sky and knew that he had passed on. He received a casket containing the verses called the Seven Nails and instructions to extract the Nyingthik teachings from their hiding place at the Tashi Trigo Temple, and to meditate on them at the Bhasing charnel ground in India.

Jnanasutra returned to India with the texts and lived in the Bhasing charnel ground teaching the Nyingthik (Heart Essence) to dakas and dakinis. He also transmitted the teachings to his friend and disciple, Vimalamitra, and entrusted to him the texts of the entire oral tradition. At the end of his life his mortal body dissolved into a body of light.