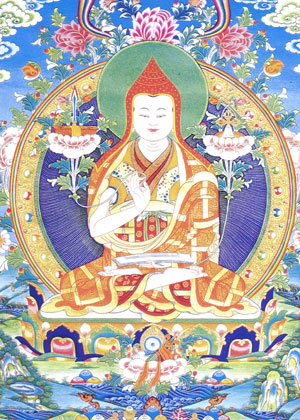 Dza Patrul Rinpoche (1808-1887) was among the greatest of the Nyingma masters of the nineteenth century. Considered the speech incarnation of Jigme Lingpa, he wrote a number of important works that are influential not only in the Nyingma school, but throughout Tibet. His influence both as a teacher and as a wandering adept was widespread among monastic institutions and among the lay people.

Born in the Dzachuka Valley at the beginning of the nineteenth century, his root guru for Dzogchen teachings and transmission was Jigme Gyalwe Nyugu. After receiving his teacher’s personal guidance he went to the mountains to meditate, returning now and then for further instructions. Sometimes he would do a Dzogchen practice for months, other times he would simply watch the nature of mind.

There are many stories abut Patrul Rinpoche, who became extremely famous during his lifetime, yet remained the most humble of masters. He was non-sectarian in his teaching, writing and practicing. He gave teachings on sutra, tantra and Dzogchen and awakened or transmitted ultimate realization to the minds of many disciples, however only on very few occasions did he give empowerments or perform elaborate ceremonies.

While living as a wandering yogi in the caves in the mountains near Dzogchen monastery he composed Kunzang Lame Shalung (The Words of My Perfect Teacher), perhaps the most famous explanation of the preliminary practices of the Longchen Nyingthik. Patrul Rinpoche described the work as a "compendium" of the oral teachings given to him by his own teachers. This classic work is known for the clarity and directness of its explanations.

In the late 1860's Patrul Rinpoche returned to Dzogchen Monastery, where he taught many important texts at Shri Singha monastic university and elsewhere. He spent his final years in the region of his birthplace in Dzachuka. In the last few years of his long and wondrous life, he exchanged transmissions with the Fifth Dzogchen Rinpoche. Patrul Rinpoche entered into parinirvana at the age of 80.