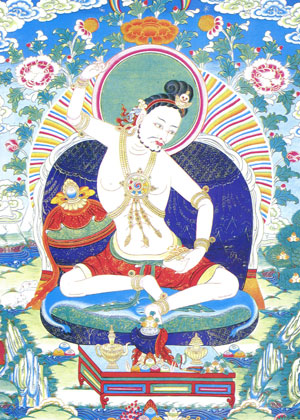 Shri Singha was born in China and was a great scholar of wordly sciences. In a vision, Avalokitesvara instructed him to go to the Sosadvipa charnel ground in India where he would attain enlightenment. To prepare for his pilgrimage to India, Shri Singha studied different tantras for seven years on the sacred mountain of Wu T'ai Chan.

He then took ordination and maintained monastic discipline for 30 years. Avalokitesara appeared to him again and repeated his advice. Before departing for India Shri Singa engaged in a practice that resulted in achievement of miraculous powers, allowing him to travel to Sosadvipa very quickly. He met Manjushrimitra there and studied and practised with him for 25 years.

When Manjushrimitra achieved the rainbow body, Shri Singha received his master's final testament, and meditating with those instructions, he realized the essential meaning of Dzogchen. Shri Singha was also able to withdraw the texts Manjushrimitra had hidden in the rock near Bodhigaya. Upon his return to China, he hid the first three cycles of teaching near the Bodhi Tree Temple in China.

Following the instructions of a dakini, he concealed the Nyingthik cycle in a pillar in the Tashi Trigo Temple. After this Shri Singha lived in the Siljin charnel grounds meditating and giving teachings. As he achieved the rainbow body his final testament descended into the hands of his disciple, Jnanasutra.