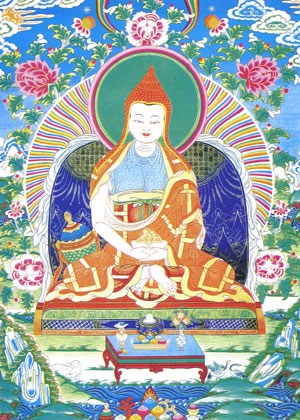 Vimalamitra was born in western India. While living in Bodhgaya, he met Jnanasutra. Vajrasattva appeared to them and pointed out that they had achieved nothing through five hundred rebirths as scholars. If they aspired to reach Buddhahood in this lifetime, they should go to China to find their master Shri Singha at the Bodhi Tree Temple.

Leaving his friend behind, Vimalamitra, highly motivated, immediately set out for China and found Shri Singha as Vajrasattva had predicted. Over twenty years he received instruction on the outer, inner and secret teaching of the oral lineage. Completely satisfied - although the master had not given him the texts - he returned to India.

Meeting Jnanasutra, Vimalamitra related what he had received and accomplished and Jnanasutra immediately decided to travel to China to meet Shri Singha. Years later, still intent on his meditations and doing tantric practice, Vimalamitra was visited by dakinis who instructed him to go to the Bhasing charnel ground if he wanted to receive deeper instructions.

At Bhasing, he met his old friend Jnanasutra and begged from him the instructions he had missed. Jmanasutra bestowed the empowerments, instructions and texts. Vimalamitra meditated on the teachings he received for ten years before Jnanasutra achieved the rainbow body and left him with his final legacy, a tiny jeweled casket containing the verses called Four Methods of Contemplation.

He instantly achieved realization equal to that of his master. He made three copies of the texts and concealed two in secret places and entrusted the third to the dakinis.

Later, Vimalamitra was invited to Tibet by the translators Kawa Peltsek and Chokro Lui Gyeltsen, emissaries of King Trisong Detsen, and he was welcomed as a great master. Yudra Nyingpo became his collaborator and they translated a variety of Dzogchen texts. He concealed the translated texts at Gekong in Chimpu.

After thirteen years in Tibet he departed for the Five Peaks in China and there attained the rainbow body. He vowed to send an incarnation to Tibet every century to carry out the work of maintaining and disseminating the Nyingthik teachings for as long as the Buddha Dharma exists.