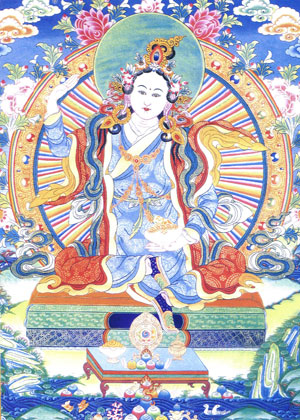 The Nyingma tradition regards Yeshe Tsogyal as an emanation of Samantabhadri, the primordial female Buddha. Born as a merchant during the lifetime of a former Buddha, Yeshe Tsogyal went before him and vowed not to be reborn except for the benefit of beings. She manifested as Ganga, the Indian goddess who sprang from Lord Shiva's topknot to flow as the Ganges, the river watering the plain of north India, and then as Saraswati, the Indian goddess of the flow of language and music. She was also a disciple of Buddha Shakyamuni. According to Nyingma tradition, in 8th century Tibet, Guru Rinpoche invoked Saraswati to manifest as a woman who would help disseminate the Mantrayana.

This remarkable hermit saint, the consort of Guru Rinpoche, is sometimes shown in Nirmanakaya form, as a woman in dressed in traditional Tibetan clothing, seated and holding curved knife and skullcup. As a meditational diety she appears as the Queen of Great Bliss, a red figure holding a damaru drum in her right hand and a curved knife in her left.

Yeshe Tsogyal (777-837 A.D.) was born to the princely Kharchen family. At her birth spring of fresh water burst from the ground and formed a pond next to her house. This pond came to be known as 'Lha-tso', the divine lake. Later the spot became a famous pilgrimage site for generations of devotees.

Yeshe Tsogyal was brutally raped by her first suitor and fought over by her second. When she fled from them, she was captured and placed in the Emperor's harem. Later the Emperor offered her as a consort to Guru Rinpoche.

Guru Rinpoche set her free, and she became his disciple at age 16. When she received empowerment her flower fell on the sacred mandala of Vajrakilaya and through practicing the sadhana she rapidly gained accomplishment. She then received all of the Guru Rinpoche's teachings and became his spiritual heir. She travelled all over Tibet with her Precious Guru, blessing particular locations and depositing treasure-texts for the benefit of future beings.

She went into meditation retreat in 796 and did not come out until 805, after her great Guru had already left Tibet. She finally emerged as fully enlightened Buddha. Possibly in 837, but perhaps later, she transcended worldly existence, ascending to the Sacred Red Mountain, the luminous Buddhafield of her root lama Guru Rinpoche.