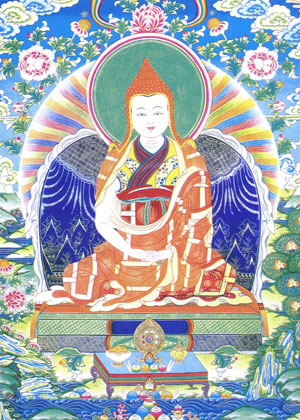 Nyoshul Lungtok was the greatest realized disciple of Patrul Rinpoche. Living with his teacher for about twenty-eight years without separation, he received the transmissions of various teachings, especially the Nyingtik teachings of Longchen Rabjam and Jigme Lingpa.

One day at the Ari Forest Patrul asked Lungtok if he remembered his mother. When Lungtok said, "Not much, sir", Patrul Rinpoche sent him into the forest to meditate on 'recognizing motherhood and 'remembrance of mothers kindness.' Lungtok meditated as Patrul Rinpoche had instructed and the bodhicitta of loving-kindness and compassion developed naturally in him.

One clear evening in a hermitage above the Dzogchen monastery Patrul Rinpoche called Lungtok and asked "Did you say that you do not know the true nature of mind?" Lungtok nodded.

"It's very simple", he said, and lying down on the ground, beckoned to Lungtok to join him.

Then Patrul Rinpoche asked: "Do you see the stars in the sky?"
"Yes"

"Do you hear the dogs barking in Dzogchen monastery?"
"Yes"

"Well, that is the meditation."

At this moment, everything fell into place. Instantaneously Lungtok gained liberation from conceptual fetters and realized the primordial wisdom, the Buddha Mind.

Throughout his life he shared the teachings of Patrul Rinpoche with all who came to him, and after the age of fifty, as instructed by his teacher, he gave Dzogchen teachings. Like Patrul Rinpoche he rarely gave transmissions of empowerment. When he died at the age of seventy-two rainbow lights arched overhead and many other signs appeared of the passing of a realized master.