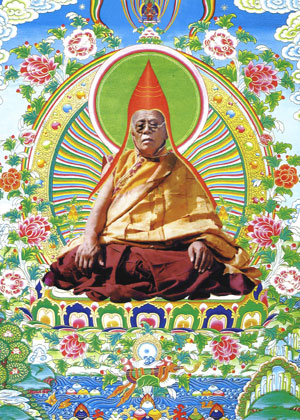 HH Lama Achuk Rinpoche's birth in Trom, Eastern Tibet was foretold by Guru Rinpoche. He learned to read and write at an early age without being taught and fervently wished to become ordained. One day in a cave he saw a great number of texts written in dakini script. He entered Trom Dokho Monastery and was ordained at age 15, serving teachers of the Sakya, Nyingma and Gelugpa lineages.

Through training the mind to accept pleasant and unpleasant circumstances these experiences fueled his meditations. Once restrictions on the practice of Buddhism were eased he turned the wheel of dharma widely, instructing vast numbers of monastic and lay people.

HH Lama Achuk Rinpoche, an emanation of Guru Rinpoche, is one of the greatest living exponents of Dzogchen, the Great Perfection teaching. After spending 40 years in retreat with Arik Rinpoche, he established Yachen Gar, an encampment of thousands of monks, nuns and lay practitioners, in an isolated valley near Kandze in Sichuan.

The purpose of the Gar is to revive the sacred landscape of Tibet and to provide students with an opportunity to receive a comprehensive Buddhist education. Many have instantaneously actualized the primordial wisdom of the path through seeing, hearing or being touched by HH Lama Achuk Rinpoche, or even through thinking of him. There is no doubt that he has ripened, liberated and placed an inestimable number of sentient beings on the profound path.